You are here:
Shows 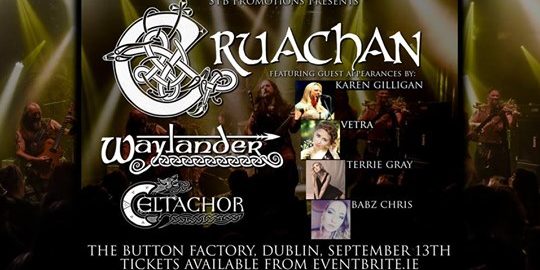 Cruachan return to the Button Factory for another epic night of Celtic Folk Metal. As a special treat they will be joined on stage by FOUR guest female vocalists: KAREN GILLIGAN – no introduction needed, Karen was a member of Cruachan for almost ten years. VETRA – Vetra is a fantastic folk singer from Lithuania and has performed with Cruachan in the past. She performs solo or with the larger folk group Kulgrinda. TERRIE GRAY – Terrie is an Americana country singer who recorded her debut album in Nashville. Her first single ‘Home’ was released earlier this year to wide acclaim. BABZ ALLEN – Babs performed on Cruachan’s ‘Blood for the Blood God’ album and toured a few dates with them as well. She performs in many acts around Dublin (Babz&Chris, Crafty Fuzz) and has an incredible voice.

Joining Cruachan for this show are two of the greatest Celtic Folk Metal bands around: WAYLANDER have been going for many many years and have just released their new album ‘Eriu’s Wheel’ to huge critical acclaim. CELTACHOR have been making a name for themselves for quite some time, now they are a signed band and found regularly on the touring circuit.

Aswell as the music we have other treats in store. We will have demonstrations from the Jofur Drengir re-enactment group. Celts vs Vikings shall be the theme of the night. Most of this group took part in the 25th anniversary show from last year but we are planning bigger and better for 2019.

There will also be a dark burlesque performance between bands and a collaborative, gothic themed, contemporary dance piece during part of Cruachan’s set. This is going to be some night!

Tickets €20 from Eventbrite, or €25 at the door (depending on availability)